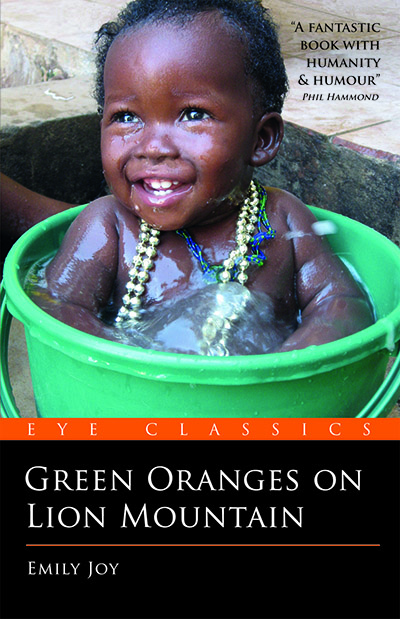 Emily Joy puts on her rose-tinted specs, leaves behind her comfortable middle class life as a doctor in York and heads off for two years voluntary work at a remote hospital in Sierra Leone. Emily finds the prospect of life in a rural African village less than enticing. There is no equipment, no water, no electricity and, worst of all, no chocolate to treat her nasty case of unrequited love. Despite this, the Sierra Leoneans she meets (who, after all, have far worse problems to think about) inspire her with their courage and vivacity. Dr Em’s poignant and often hilarious adventures show us how fulfilling volunteering can be.

A Freetown taxi wasn’t like your usual taxi. It went where it was going and would squeeze you in if you wanted to go there too, even if you had to share a seat with the driver. [AC1]  an hour with Lucky Dube blaring. But as soon as he hit thirty-five, he turned the engine off.

Five months later, I was sitting on the toilet at Gatwick Airport opening a bag of Maltesers. I popped a couple in my mouth and leaned against the cistern to stare at The Pregnancy Advisory Service number. Not that I was ever likely to need their services. ‘Finding a man’ was on my list of goals - after saving the world, saving lives and saving my soul, of course. And losing weight. Four more Maltesers followed their siblings.

That left saving the world (always a bit unrealistic) and saving lives (not likely after the Surgery For Non Surgeons course.) I stuffed a handful of Maltesers in and crunched. Although I wore a mantle of sunny optimism, my robust exterior and endless jollity belied my lack of self-confidence but then, of course, all extroverts claim to be shy. People my size, with the voice to match, are not allowed to be vulnerable. My voice. Ughh, now there was a thing. Too loud and too English. How I longed for a soft Scottish burr like Morag’s. I had spent six years at Dunblane High School and six years at Edinburgh University, declaring that I was a real Scot. It wasn’t my fault that I had spent my pre-school years as an Air Force daughter (until my father crashed his plane into a water buffalo which inconsiderately ambled across the runway). With this hereditary tendency for embarrassing disasters, why was I setting myself up for more?

“OK, Em. You don’t have to go.” I was right, I didn’t. I hadn’t checked in, and could easily sneak off before my VSO compatriots even knew I’d arrived. There were other ways of achieving my goals. I could go on a diet, for instance. Hells bells, I could even start going to church!

I rummaged around in the bottom of the bag of Maltesers to find only a single osteoporotic crumb of honeycomb. Pathetic. I crumpled the bag and was about to sling it on the floor when my middle-class upbringing got the better of me. I was not a mere smoker who indulged her habit in the toilets and threw her butts in the pan. I was a chocolate eater and we were surely a better breed of addict. I put the wrapper in the sanitary disposal unit and sighed. Time to make a move.

I kicked my rucksacks, crammed with Tampax, rubber gloves and of coursePrimary Surgery, out of the cubicle. The choice between the rubber gloves and a pile of rubbishy best-sellers had been a difficult one, but AIDS mania filled the tabloid and medical press at that time, and Africa’s figures were alarming. Catching HIV from a patient during surgery seemed a cruel reward for attempting to save the world. Another good reason for staying at home.

Turning the cold tap full on, I washed my face under the washbasin mirror. My usually warm brown eyes frowned back accusingly, puckering my neat nose and cupid’s bow mouth. Perhaps the straight dark bob with Cleopatra fringe didn’t flatter my square face and perhaps if I ever tried a little makeup… still, I looked quite young for twenty-seven - a sturdy example of a female Homo Sapiens, built to withstand the rigours of Africa. Nice teeth too, I was told. I smiled to reveal my best feature. All the better for eating with.

“Hi, Emily, you’re here!” I jumped. Lindsey dropped her bags next to mine and threw her arms round me. “The others are all checking in. They thought you’d wimped out!”

“That’s what I said,” Lindsey giggled in a lovely Scottish lilt that I would have killed for. It was hard to imagine a more unlikely librarian. “Wait for me, would you? This is the fourth time I’ve been. I’m so excited!”

I watched Lindsey’s svelte figure slip into my cubicle then cursed at the mirror.

Positive thinking. That was the trick. Visualise yourself as you want to be and it will be so. I closed my eyes to imagine my metamorphosis, two years hence.

There I was, slim and glamorous, an accomplished surgeon, stepping off the plane on the arm of a handsome diplomat, my friends gaping at the swan before them…

“Dream on.” I stuck my tongue out at my reflection “Just try to survive two years without killing too many patients or sticking yourself with an AIDS-infected needle.”

At least there was still time to buy another bag of Maltesers.

"Joy is not Mother Teresa. But her refreshing honesty and humour combine to make her tale all the more harrowing, yet simultaneously uplifting."

"Green Oranges on Lion Mountain illustrates the tenacity and determination of the people of Sierra Leone."

''The book reflects Emily Joy’s passion for helping and her respect for, the people of Sierra Leone.''

''Despite all her flaws (or because of them?) she is an incredibly likeable character and her honesty makes her a trustworthy narrator.''

''Her adventures, the friends she makes and her wonderful colleagues all come to life and having finished such a rich, witty and wise book I'm at a loss for what to read next.''